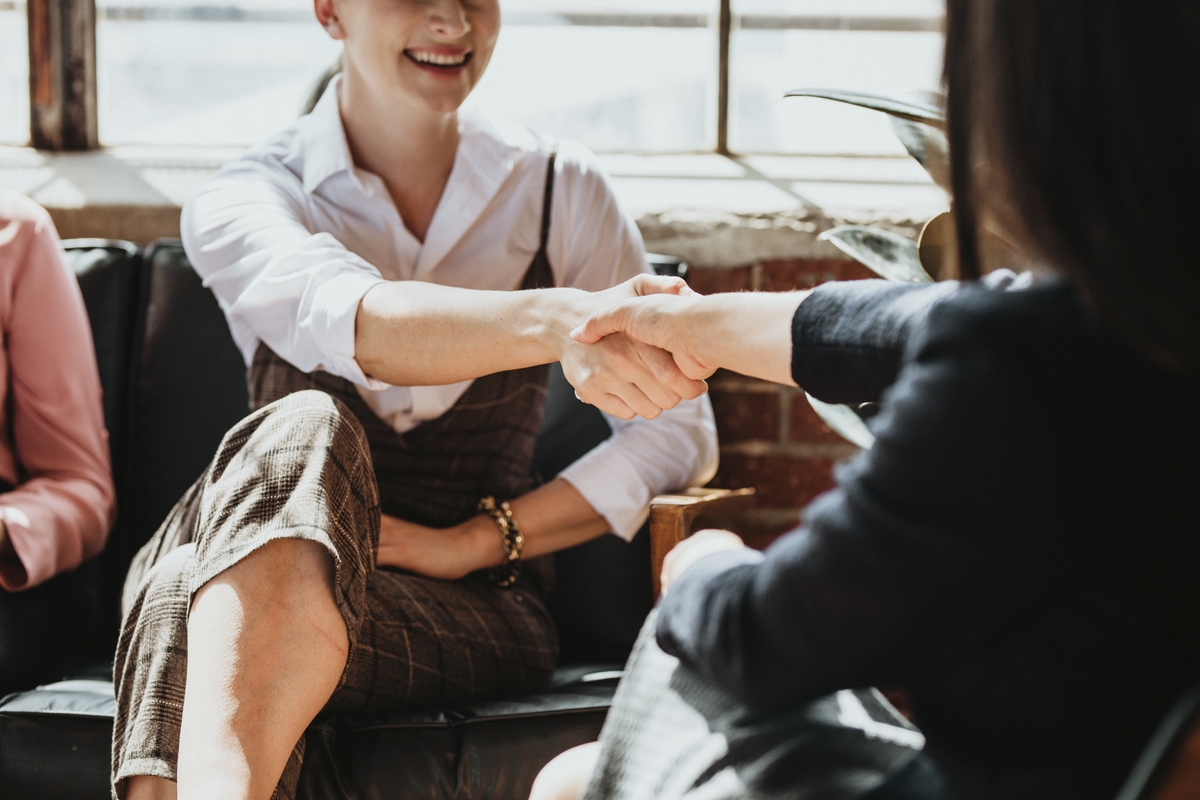 LOC Credit Union is the result of a merger between two pre-existing credit unions, both of which were initially formed to serve employees of the school districts in their area. Today, as a state-chartered credit union, LOC serves 33,000 members and has approximately $465 million in assets. LOC has long had a history of helping students in Michigan, from opening a student-run credit union in 1995 to equipping youth with the necessary skills for better money management.

The problem(s): mergers, new hires, and an antiquated knowledgebase

LOC CU had had enough of their old knowledgebase system when they began their search for a dedicated finance intranet software solution. They were looking for more than just a basic document holder and knowledgebase. They were especially interested in adopting powerful forms functionality that could streamline their daily member processes—such as debit and credit approval, lien releases, and mortgage referrals. They needed to make the submission, review, and approval of forms easier and knew that doing so would bring them significant benefits in time savings and accountability.

After not having had an intranet for over a decade, getting employees accustomed to using one for day-to-day tasks was a challenge, but IC’s finance intranet solution, coupled with assistance from our expert team, helped the Marketing team at LOC CU get up and running in no time. In 2016, they adopted Intranet Connections’ (IC) software and their new intranet, “Pulse”, was born.

Intranet Connections has worked extensively in providing credit unions with robust finance intranet solutions; our software was purpose-built for the problems LOC CU was facing. IC’s software provided LOC CU with time-savings in various member processes, from highlighting important company news by department to streamlining forms and improving findability over their previously unsearchable knowledgebase. From the moment LOC CU became an Intranet Connections customer, they began to work closely with our team to set up powerful forms, some with workflows that even alerted key approval managers when a particular form had been submitted and needed to be signed off.

In addition, LOC CU designed a unique homepage view, segregating organizational news by department, ensuring that employees can see essential events most relevant to their department at a glance. LOC CU also customized the menu bar to provide one-click access to their most used forms to improve employee efficiency.

While LOC CU onboarded IC’s finance intranet software back in 2016, they have worked with the team at IC to update, improve, and continuously optimize their intranet in the six years since its launch. 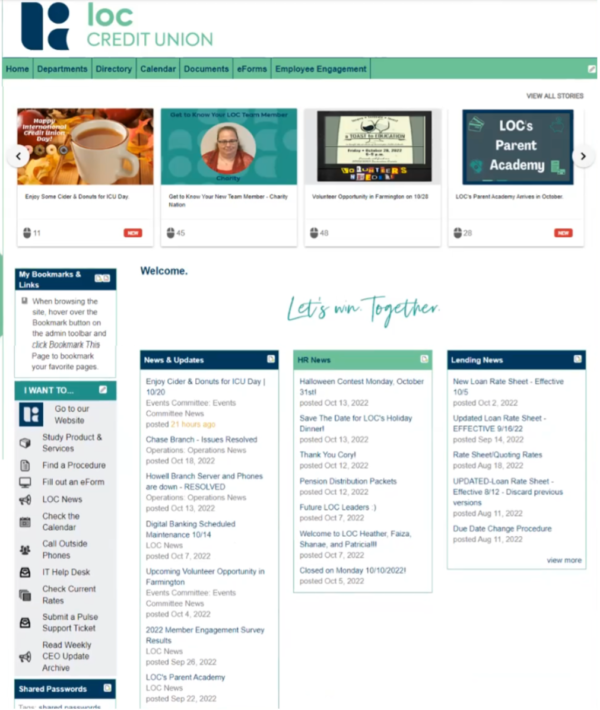 The result: a finance intranet that inspires efficiency in all regards

Six years later, LOC CU still uses their intranet for necessary member-request forms, to share and highlight community and company news, and to onboard new hires. With over 1,300 form submissions per month, the forms feature on IC’s software solution has been a big hit for LOC CU.

Having undergone a merger in 2022, 25 employees who previously had never used one quickly adopted LOC CU’s intranet—using their finance intranet as a place for employees to be social and get to know one another, through questionnaires and highlighting employees right on the storyboard of their intranet! LOC CU’s intranet has become the “Pulse” of the organization in every sense of the word.

1,300 forms. Per month. Think of all the paper, not to mention time, saved by having every necessary form on your intranet, some with detailed automation that notifies key departments and managers of their submission. And while many of these forms are for internal/HR-related workflows, the majority of the forms are for member requests and inquiries. Common examples include credit card applications, loan applications, and lien releases on member assets. Having recently expanded to serving all of Michigan, LOC CU expects these forms to continue to be used more-and-more and save more time and have a more significant impact on efficiency in the long run.

By having the top five most used member-related forms one click away from the homepage, LOC CU’s finance intranet makes it intuitive for those who are new to the intranet (whether through recent mergers or new hires) to hit the ground running and make sure member requests are handled speedily. Not only does having a robust forms feature on their intranet make employees’ lives more manageable, but it also aids in ensuring LOC CU provides the speedy customer service they are known for in Michigan.

Powerful automation, which IC calls “workflows,” also ensures that compliance is met to the highest degree. LOC CU’s employees can rest assured knowing that their intranet will automatically alert appropriate departments and approval managers for review and final sign-off once they submit a form.

“[The workflows] are attached to the majority of our forms and help make sure the right people see the right [forms].”

No one wants to miss an important announcement at work, and with LOC CU’s finance intranet solution, none of their employees need to worry about that! To keep everything organized and easy to read, not only does LOC CU utilize the storyboard feature to highlight the most important events and news, but each department also has its own segregated news feed right on the home page so that employees can find news and events that are most relevant to them. 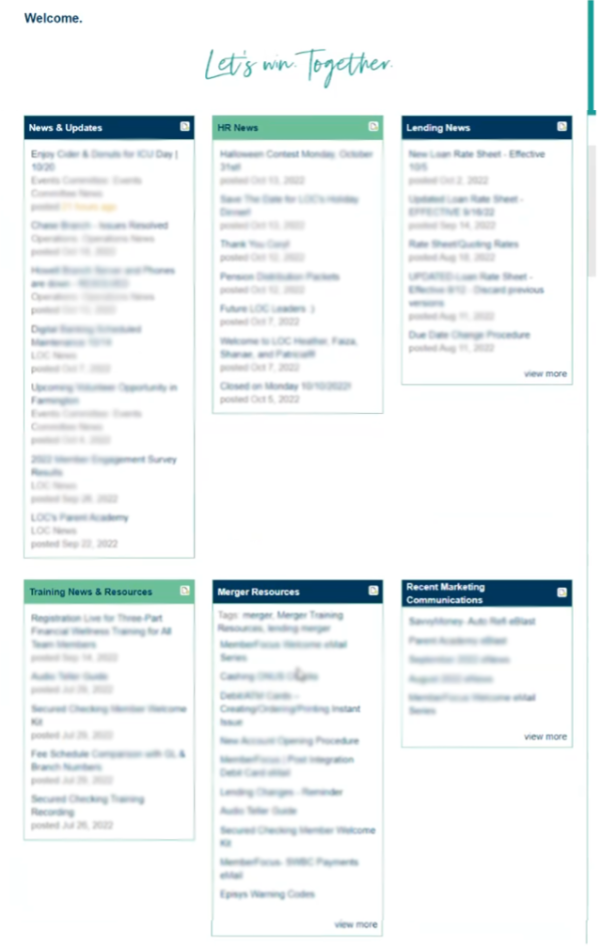 Building a sense of community, right from onboarding

While purpose-built finance intranet software provides efficiency and helps keep employees informed, they are also a great place to build a community and ensure employees of any tenure experience the culture of the credit union.

Having recently undergone a merger, LOC CU needed to ensure new employees were easily integrated into the LOC family, and their intranet helped with that. They needed to ensure their ever-growing credit union had the technology to make their processes more efficient, while onboarding and integrating new employees.

New employees are asked to fill out a short and fun questionnaire on their intranet, which is posted along with a headshot right into the storyboard section of their front page. This way, new hires can quickly bond with colleagues over shared interests and fun facts!

Other widgets, such as a quick chat feature and status updates that let others know who is out of the office also help to ensure that staff members feel connected across five different branches, including those employees who are working remotely.

Interested in learning how IC’s finance intranet software can enrich your organization and boost efficiency like it did for LOC CU? Book a demo now and discover how our expert team can making launching an intranet intuitive and easy.